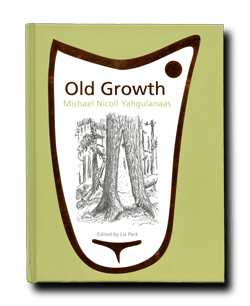 Michael Nicoll Yahgulanaas is a renowned Haida artist who, gradually, during a thirty-year career as a political activist, began to apply classic Haida visual forms and narratives to contemporary means of communications, including political cartoons and comics...Old Growth chronicles over thirty years of Yahgulanaas' graphic works that document the history of political negotiations and cultural conflict off the Northwest Coast of Canada from the 1970s to the early 2000s. Containing studies and experiments, finished work previously unpublished, and works that few have seen, this book reflects on such urgent topics as depletion of natural resources, global climate change and the fundamental question of 'how to live together'.